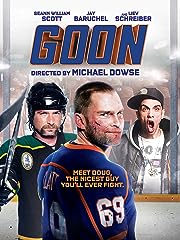 Not content with his job as a bouncer, Doug Glatt (SeannWilliam Scott) dreams of a more rewarding job and gaining his parents' respect. When a chance encounter with an on-ice thug leads to a fist fight that Doug easily wins, the onlooking coach sees Doug's potential, despite his lack of any hockey playing ability. Joining the team and with the encouragement of his best friend (Jay Baruchel), Doug quickly becomes a rising star. Soon he'll have the opportunity to face off against league thug Ross Rhea (Liev Schreiber), perhaps finally land a girlfriend, and stick to a job he enjoys. Now all he needs to do is learn how to skate.