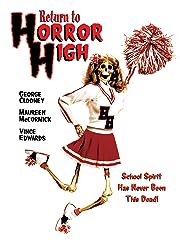 In 1982, Crippen High School was the scene of a series of brutal murders. The killer was never caught. Now, a low-budget film crew that includes an ill-fated leading man (George Clooney), the pretentious director (Scott Jacoby), a lecherous producer (Alex Rocco) and numerous nubile actresses have all returned to Crippen High to film the story of what actually happened. But when members of the production are stalked and slaughtered one-by-one, it appears that the depraved maniac is back. Who will survive the massacre? And what will be left of their careers? Vince Edwards and Maureen McCormick (Marcia from The Brady Bunch) co-star in this bloody body-count shocker in the tradition of Scream and Scary Movie, filled with all the gore, gags and gratuitous nudity that made the '80s a paragon of cinema excellence.