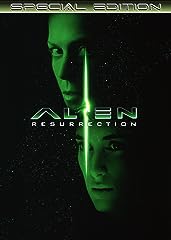 Get even more sci-fi action in the Special Edition of Alien Resurrection, featuring a custom intro from Director Jean-Pierre Jeunet! 200 years after her last adventure, a group of scientists has cloned Lt. Ellen Ripley (Sigourney Weaver), along with the alien queen inside her, hoping to breed the ultimate weapon. But the resurrected Ripley is full of surprises for her resurrectors--as are the aliens they've attempted to imprison. To combat the creatures, Ripley must team up with a band of smugglers, including an advanced android named Call (Winona Ryder), to combat the rampaging aliens in a lab ship hurtling toward Earth.