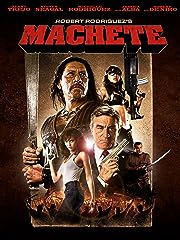 He looked like just another day laborer from the streets, and the perfect fall guy for a crooked political assassination. But he turned out to be Machete (Danny Trejo), a legendary ex-Federale with a deadly attitude and the skills to match. Left for dead after clashing with notorious Mexican drug kingpin Torrez (Steven Seagall), Machete has escaped to Texas looking to disappear and forget his tragic past. But what he finds is a web of corruption and deceit that leaves a bullet in Senator McLaughlin (Robert De Niro) and Machete a wanted man. Machete sets out to clear his name and expose a deep conspiracy. But standing in his way are Booth (Jeff Fahey) - a ruthless businessman with an endless payroll of killers, Von (Don Johnson) - a twisted border vigilante leading a small army, and Sartana Rivera (Jessica Alba) - a beautiful immigrations officer torn between enforcing the law and doing what is right. Helping Machete even the odds are Luz (Michelle Rodriguez) - a sexy taco-truck lady with a rebellious spirit and revolutionary heart, and Padre (Cheech Marin) - a priest who's good with blessings and better with guns. Carving a path of bullets blood and broken hearts, Machete's quest ultimately leads him back to Torrez for an epic battle of revenge and redemption.