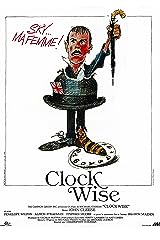 When he's invited to a headmasters' conference in order to make his inaugural speech as chairman, Brian Stimpson (John Cleese), a man obsessed with punctuality, sets off with time to spare. However, numerous unexpected obstacles lead him into a race against the clock to arrive on time. Playing Stimpson as an obsessive, fussy, and sardonic social climber, Cleese is here in full-on manic mode, evoking memories of his role as Basil Fawlty in the classic sitcom Fawlty Towers. A certified gem of British film comedy, Clockwise has kept time tremendously.