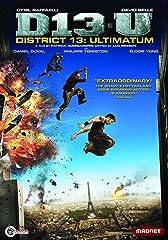 Watch Now Before It's In Theaters. An elite cop & reformed vigilante reunite to infiltrate a lawless sector of Paris overrun by crime. Featuring mind-blowing stunts and insane fights derived from the gravity defying martial art Parkour. Damien and Leito return to District 13 on a mission to bring peace to the troubled sector that is controlled by five different gang bosses, before the city's secret services take drastic measures to solve the problem.After a successful mission against drug lords, the efficient Captain Damien Tomaso is framed at home with three kilograms of heroine planted by the police in his kitchen and he is arrested. Meanwhile a group of teenagers film the action of dirty agents leaded by Roland from the security agency executing policemen in their car and then leaving the car with the corpses in the 13th District to blame the gangs and begin a civil war. Behind these events, the corrupt chief of the security agency Walter Gassman had received a huge amount as kickback from the constructor Harriburton that has interest to construct buildings in the poor area and uses the situation to force the President of France to authorize to nuke five towers in the district. The teenager with the film is hunted by the police but he delivers the memory card to Leito meanwhile Damien calls him from the precinct asking for help. The friends team-up with five dangerous bosses to gather evidences to prove to the president that Gassman has provoked the conflict in their district.