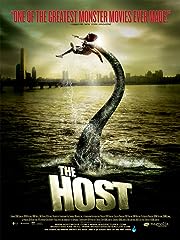 On 09 February 2000, the American military base of Yongson releases toxic chemicals in the drain to the Han River under the direct order of an arrogant coroner. Six years later, a mutant squid monster leaves the water and attacks people on the side of the river. The teenager Park Hyun-seo is carried by the creature and vanishes in the river. While grieving her loss, her slow father Park Gang-du; her grandfather and owner of a bar-kiosk nearby the river Park Hie-bong; her aunt and archery medalist Park Nam-Joo; and her graduated unemployed uncle Park Nam-il are sent by the army with all the people that had some sort of contact with the monster to quarantine in a facility. During the night, Gang-du receives a phone call from Hyun-seo telling that she is alive in a big sewage nearby the river. Gang-du tell the militaries but nobody believes on his words, saying that he is delusional due to the shock of his loss. The Park family joins forces trying to find Hyun-seo and rescue her.