A Dangerous Man - Lawrence After Arabia 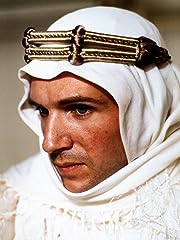 September 1919. an audience of dignitaries, including the King and Queen of England, watch the Royal Command Performance of the Film Show 'With Lawrence in Arabia' detailing the glamorous desert exploits of T.E. Lawrence and his companion in arms the Emir Feisal. A young man at the back of the auditorium watches for a while, then walks out in disgust. He is just recognisable as Lawrence. Armistice day 1917. Lawrence, newly retuned from the desert and full of optimism, greets Feisal at Victoria station. Feisal fears he is about to be betrayed by the British, who had promised him Arab Independence in return for fighting against Britain's' enemy, the Turks in the Great War. Lawrence tells Feisal that he will ensure Britain honours all its promises to the Arabs - and he, Lawrence, will make Feisal king of Syria. Lawrence makes his case for accompanying Feisal to the Paris peace conference in front of four important British politicians - Lord Curzon, Sir Louis Maitland, Sir Robert Valance, and Lord Dyson. The latter two are suspicious of Lawrence, who nonetheless convinces Curzon that he can 'control' Feisal. Lawrence and Feisal arrive in France, but the French do no recognise Feisal's' status, and uncoupled his carriage from the train. Lawrence is confronted by first Monsieur Dumont, staff secretary to the French Premier Clemenceau, and then Lord Dyson, who together with Sir Robert Valence, drives away with Lawrence. At this hotel in Paris, Lawrence bumps into two rival experts on the Middle East, Gertrude Bell and Colonel Meinertzhagen, before going to see Curzon and enlisting his help in admitting Feisal to Paris. Feisal and his entourage arrive in the city , and he and Lawrence immediately begin campaigning for the Arab cause. But they are frustrated by lack of press interest, and by British and French scheming to thwart their aims. Lawrence decided they can only succeed by projecting a glamorous and evocative image and stages

13 Assassins (English Subtitled)
The Waterfall Murder
Mysteries of the Superstition Mountains
Hotel Limbo
Good Day to be Black and Sexy
Disraeli: Portrait of a Romantic
Debt of Honor: Disabled Veterans in American History $
The Sum of All Fears $
Clear and Present Danger $
Patriot Games
The Hunt for Red October $
Jack Reacher $
Jack Reacher: Never Go Back $
What Is My Name
Mysteries of the Superstition Mountains
Srugim
What Is My Name
Taller Than The Trees
Summer Rebels
Sashinka
❮ ❯