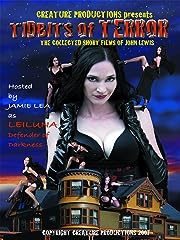 Collected here are the short horror films of Indie Film Maker JON LEWIS of Creature Productions, the company he helped to create. Hosted by LeiLuna (JAMIE LEA) in a comedic tale where the wise-cracking lady meets the mythical Pandora (Ashley lauren) and her box of evil. Included is an interview with John Lewis along with these tales: THE PHONE CALL: A foul mouthed drug dealer keeps losing his temper and his gang to a mysterious woman on the phone. She wants to meet him. Only one will return alive, PERMANENT JOB: Four friends gather for a game of cards. Tom alone has a job, a permanent job and it's...terminal. THE TRACKER: Don't ever cross Cassie or her friends because she'll find you and when she does, Lord help you. THE INCREDIBLE COMIC BOOK MURDER: Roger, they say, had died at the hands of the Skunk Ape, just as it had been illustrated in the comic book. But, unfortunately, for his true killer, the police read comics too.