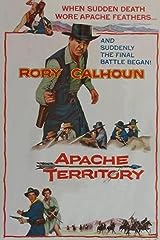 Following the aftermath of an attack by a marauding band of Apaches on a wagon train, drifter Logan Cates (Rory Calhoun) comes upon the lone survivor, a distraught adolescent girl. Taking charge of his new ward, Cates encounters another besieged group of settlers and together the group takes refuge at Papago Wells, where they try to wait out the Apaches and fend off another attack. As their food and water give out, so does the courage of many of his embattled force, leaving Cates to use a dust storm for cover as he and the remaining settlers strike back in their battle to survive. Directed by Ray Nazarro from a screenplay based on the Louis L'Amour novel “Last Stand at Papago Wells,” Apache Territory co-stars Barbara Bates, John Dehner, Carolyn Craig and Tom Pittman. Newly remastered.