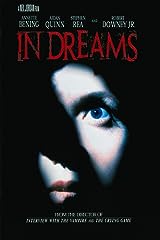 Claire Cooper (Annette Bening), has been having psychic visions all of her life, though she's never been clear of what they mean. Now an adult, she lives an idyllic, small-town life in a Massachusetts farmhouse with her airline-pilot husband Paul (Aidan Quinn) and her young daughter Rebecca (Katie Sagona), while Claire illustrates children's books. A psychopath (Robert Downey Jr.) has been kidnapping young girls in their area, and one is currently missing. Claire has a recurring dream about the killer walking with a girl through an apple orchard. Paul tells police detective Jack Kay (Paul Guilfoyle), who doesn't believe him, as the girl's body had been found at the bottom of the lake. Claire's vision was actually a premonition, starting a chain of events that would create a two-way link to the killer. The key to the mystery is the lake itself, of which Claire dreams, created when the old town of Northfield was flooded to make a reservoir. As her psychiatrist Dr. Silverman (Stephen Rea) does not understand her now waking dreams, Claire alone must now lose herself to the visions. She must relive the killer's memories to find his identity and location. Director Neil Jordan has explored the nature of dreams in a more Freudian manner in his Company of Wolves.