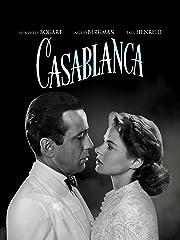 Academy Award winners Humphrey Bogart and Ingrid Bergman light up the screen in one of the most enduring romances in movie history--Casablanca. Rick Blaine (Bogart--The African Queen, The Caine Mutiny) owns a nightclub in Vichy-controlled Casablanca, frequented by refugees desperate to escape German domination. Despite the ever-present human misery, Rick manages to remain uninvolved in World War II now raging across Europe and Northern Africa. But all that changes when Ilsa Lund (Bergman--Gaslight, Notorious) walks through the front door of Rick's club--Rick must now choose between a life with the woman he loves and becoming the hero that both she and the world need.