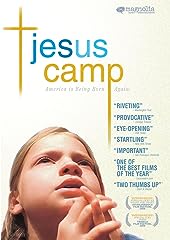 The youngest foot soldiers for the Lord are shown in their native environment in this documentary. Becky Fisher is a children's pastor who runs "Kids on Fire," a summer camp for evangelical Christian children in North Dakota. Fisher believes in the political and moral importance of a Christian presence in America, and uses her camp to reinforce the religious training most of her charges are already receiving at home (the majority of the campers are home-schooled by their parents). Using video games, animated videos, and group activities to help put her message across, Fisher encourages the kids to pray for George W. Bush and his Supreme Court appointees while urging them to help "take back America for Christ." For the most part, the children seem reasonably ordinary beyond the fact they pray with uncommon fervor and sometimes speak in tongues. Along with Fisher and her cohorts, Jesus Camp features interviews with Ted Haggard, an evangelist and advisor to George W. Bush, and Mike Papantonio, a Christian talk show host who believes the right-wing slant of many Christian evangelists is taking the church into a dangerous direction. Jesus Camp was directed by Heidi Ewing and Rachel Grady, who previously made the acclaimed The Boys of Baraka.