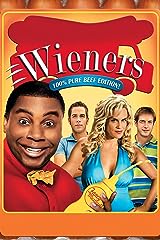 Hop on board the wiener wagon and take a ride with WIENERS a hysterical and irreverent new comedy - in the tradition of Harold and Kumar and Road Trip. Three friends embark on a zany cross-country road trip filled with oddball characters, strange bodily fluids and, of course, delicious hot dogs for everyone! When happy slacker Joel is publicly humiliated on the "Dr. Dwayne Show," he falls into a serious funk until his friends Wyatt and Ben force him to join them on a cross-country road trip. The three guys set out in Wyatt's self-made wiener-wagon to hand out free hot dogs across America, with the hopes that the crazy stunt will land Wyatt his dream job working for Oscar Meyer. As the guys make their way to Los Angeles, they endure a series of misadventures both delicious and nasty, and Joel gets closer to getting even with Dr. Dwayne. Hilarious cast includes Kenan Thompson (TV's "Saturday Night Live," Fat Albert), Darrell Hammond (TV's "Saturday Night Live," Scary Movie 3, Epic Movie) and Andy Milonakis (TV's "The Andy Milonakis Show"). Also stars Jenny McCarthy (John Tucker Must Die, Scary Movie 3)