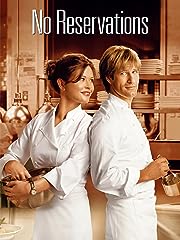 Academy Award winner Catherine Zeta-Jones (Chicago) teams with Academy Award-nominated director Scott Hicks (Shine) for this remake of the 2001 smash-hit German comedy Bella Martha about a frosty, workaholic, perfectionist chef who must surrender some control of her restaurant to a carefree male colleague (Aaron Eckhart - Paycheck, Erin Brockovich) when she becomes the guardian of her willful young niece (Abigail Breslin - Little Miss Sunshine) after the girl's parents are involved in a tragic accident. With its tantalizing blend of comedy, romance and food, No Reservations is a feast to savor.

R.E.G.I.N.A. I Am
The Handmaiden
Pipeline
Ring of Fire
Ring of Fire II: Blood and Steel
Major League
Lolo
The Lair of the White Worm
Hook
The Fog (1980)
Shocking Asia 2 $
Stealing Chaplin
Zombie For Sale
Attack the Block
Rick and Morty (Uncensored): Season 5 $
The Lair of the White Worm
The Shawshank Redemption $
Princess Of The Red Ficus Tree - Dazang Tukung
Catch Me If You Can
How The Earth Was Made Season 1
❮ ❯