Renfrew Of The Royal Mounted 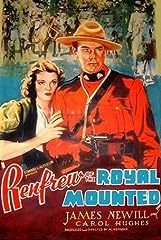 Royal Canadian Mountie Renfrew is assigned to bust a counterfeiting ring operating on the Canadian-USA border, with the aid of his dog "Lightning". Renfrew chases the crooks on horseback and airplane to no avail. Ring leader George Poulis has forced engraver James Bronson, a former convict, into working with his gang through threats. Bronson's daughter Virginia convinces him to escape but they are caught by George's thugs. The pair are thrown into the lodge's refrigerated meat locker, making it a race against time for Renfrew to rescue the pair and capture the bad guys at the same time.