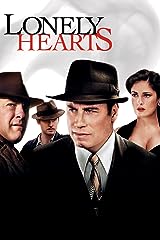 John Travolta, James Gandolfini, Salma Hayek, Jared Leto and Laura Dern star in this crime-thriller, based on a true story. Two homicide detectives track down Martha Beck and Raymond Martinez Fernandez, a murderous pair known as the "Lonely Hearts Killers" who lured their victims through personal ads in newspapers. Martha Beck (Hayek) and Raymond Fernandez (Leto) were America's notorious "Lonely Hearts Killers." Their lethal scam was simple; they would swindle and then viciously murder lovelorn war widows who would answer their personal ads in which Ray would describe himself as a sexy Latin Lover. Ironically, Ray's initial introduction to Martha was as a prospective mark. But when they met, it was love at first sight, perhaps as a result of their penchant for kinky sex and their mutual love for duplicity and easy money. With Martha posing as Ray's sister, they bilked elderly spinsters and widows of their savings and then viciously murdered them in a bloodbath of sexual frenzy. When they were arrested, Martha and Ray confessed to 12 killings, although it is believed the actual number is closer to 20. At their sensational trial, Martha and Ray cooed, held hands and seemed as though they could not get enough of each other. Their plea of not guilty by reason of insanity was rejected, and on August 22, 1949, the homicidal lovers were sentenced to death. After numerous appeals, they were electrocuted on March 8, 1951, side-by-side in Sing Sing prison.