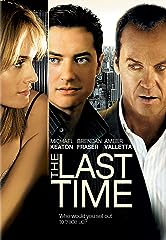 Ted (Keaton), top salesman at the Bindview sales company, is forced to show new hire and Midwest transplant, Jamie (Fraser), the ropes. Jamie's enthusiasm isn't squashed by Ted's cynical and angry personality, but after he fails to make sale after sale, Jamie quickly becomes disillusioned with the big city. When Jamie introduces Ted to his beautiful fiancé, Belisa (Valletta), the hard-bitten salesman falls hard, and when they begin an illicit affair, the real Ted emerges; losing the bitter edge that made him a great salesman. Jamie continues to fail at the sales game and Ted's guilt over the affair prompts him to feed Jamie his own sales leads to try and keep him afloat. Even as Bindview begins to lose profitability, Ted becomes increasingly focused on Belisa and his sales start to suffer. It is only when the company falls victim to a hostile takeover, that the ingenious con is revealed.