Tarzan And The Trappers 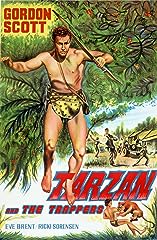 Tarzan the ape man deals with an expedition of evil white hunters who are illegally collecting animals for zoos, while also searching for a lost city filled with treasure. He manages to take out expedition leader Schroeder, only to have his even more evil brother, Sikes return in his place. Sikes is a big game hunter who teams up with greedy trader Lapin to go on a hunt to kill Tarzan for revenge, but not before the ape man tells them of the location of the lost city. Gordon Scott was always Edgar Rice Burrough's choice to play Tarzan, before Johhny Weismuller took on the role.