Never Wave at a WAC 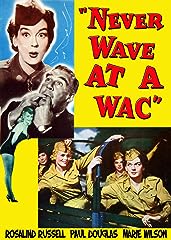 Divorced society hostess Jo McBain (Russell) decides to join the Women's Army Corps to be closer to her boyfriend Lt. Colonel Sky Fairchild (Ching), in Paris. Jo thinks that her high connections in Washington, D.C., will help her get out of the service at any time she desires. However, her ex-husband decides to teach Jo a lesson by influencing his own army contacts to give her a difficult time in her new army life. A secondary plot follows scene-stealing, well-endowed former chorus girl Clara Schneiderman joining the WACS alongside Jo to escape the legions of men who pursue her.