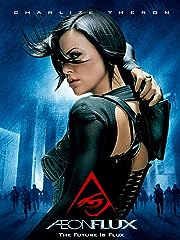 In the 25th century, the Earth's population has dwindled to a surviving five million following a devastating virus that almost resulted in the extinction of all human life 400 years earlier. Confined to one city-state, a group of rebels, led by Handler (Frances McDormand), seeks to destroy the oppressive government -- first, by assassinating a high-ranking chairman (Marton Csokas). Tasked with this mission, Aeon Flux (Charlize Theron) must integrate herself in a world of deceit and mystery.

The Secret Agent
Hardwood $
Rules of Love
All About My Mother
My Boss's Daughter
Talk To Her
Rammstein: in Amerika - Live from Madison Square Garden
Passer By
GoShogun: The Time Etrainger
Lonely Hearts
Little White Lies
I Like It Like That
Damage
Blame
Another Pair of Aces
Austin Weird
All About My Mother
I Write My Life
Maxwell
When I'm 64
❮ ❯