1933: The Fall of the Weimar Republic 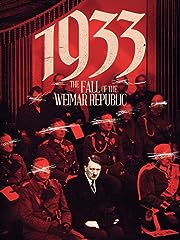 The Weimar Republic came to bear for many the humiliation of World War I and the blame for all its accompanying hardships. Despite a few years of stability, the Weimar Republic faced issues such as hyperinflation and the Great Depression, which drove many Germans into the arms of radical and extremist political parties. From this political uncertainty rose a demigod, an unexpected leader who promised to revive Germany to the powerful country it once was. Adolf Hitler converted democracy into a dictatorship, causing the fall of the Weimar Republic.